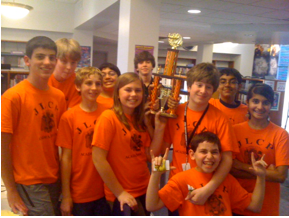 Julia Landon dominated the central division during the academic school year rising to the district titleholders for the third straight year. The Lions were 4-0 in these divisions, capping off their winnings with victories over Darnell Cookman, Kirby-Smith, LaVilla, and James Weldon Johnson.

Scholar Bowl is an extra curricular activity for which a student must qualify and maintain good standings in both academics and leadership skills. Congratulations go out to the following JLCP Scholar Bowl participants; M. Alesch, J. Belcher, A. Boulos, J. Cordova, E. Alesch, N. Kala, D. Boyd, E. Dobransky, H. Andrew, B. Balagopal, S. Athavale, and C. Welch. Special recognition to the two team managers, R. Cordova and E. Dobransky for their outstanding skills in organization and leadership. Congratulations to all of the Scholar Bowl participants this year!